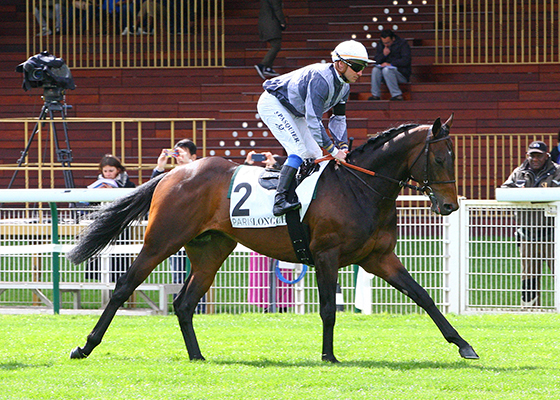 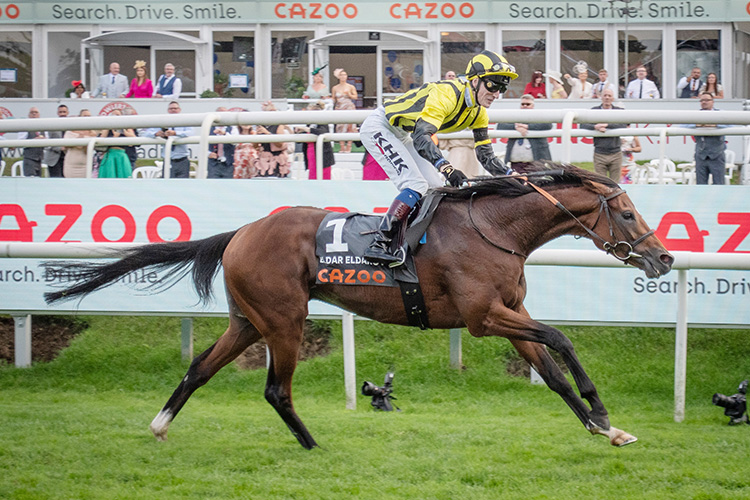 Lanwades-bred ELDAR ELDAROV stayed on well to win the final Classic of the year and became the first Classic winner bred by Lanwades Stud.  ELDAR ELDAROV won the Gr.2 Queen’s Vase and there really were no stamina doubts coming into the race.  He settled well in midfield early on and although he was tight for room and slightly hampered as he began his move he stayed on well to finish two lengths ahead of the second horse, HASKOY who eventually lost his second placing in the stewards room and was demoted to fourth.  ELDAR ELDAROV is by DUBAWI and was a winner on debut at Nottingham in October last year.  On his seasonal reappearance this year he was an impressive winner of a novice at Newcastle in May before winning the Gr.2 Queen’s Vase at Royal Ascot.  His only defeat to date came in the Gr.1 Grand Prix de Paris over a mile and a half where he finished fourth behind subsequent Gr.1 Irish Champion Stakes runner-up ONESTO.  ELDAR ELDAROV is out of Lanwades-bred mare ALL AT SEA who was a three-time Listed winner. He was sold by Staffordstown at the Goffs Orby Sale and then subsequently sold at the following year’s Arqana Breeze-Up Sale for £480,000 to Oliver St Lawrence.  ALL AT SEA is a daughter of three-time Group 1 winner ALBANOVA who is the grandam of the five-time Group 1 winner ALPINISTA. 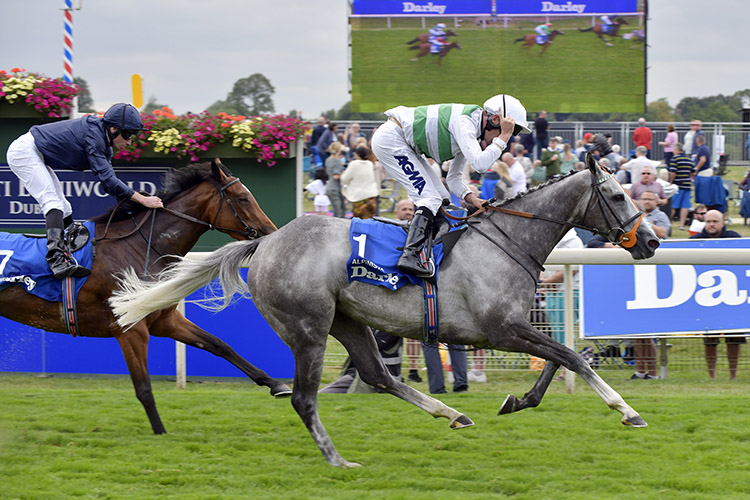 Lanwades-bred fourth generation homebred ALPINISTA won her fifth straight Group One when digging deep to win the highly competitive Gr.1 Darley Yorkshire Oaks at York which was arguably her biggest test.  The race included the Gr.1 Oaks winner TUESDAY, Gr.1 Irish Oaks winner MAGICAL LAGOON and Gr.1 Pretty Polly Stakes heroine LA PETITE COCO.  ALPINISTA settled very well throughout the race and in the home straight when she was asked to make her move she gamely did and held off the charge of TUESDAY and LE PETITE COCO in the closing stages to win by a length.  Having won the Listed Daisy Warwick Fillies’ Stakes and Gr.2 Lancashire Oaks, she went on her travels, winning three Gr.1 wins in Germany in the Grosser Preis von Berlin, in which she beat subsequent Gr.1 Prix de l’Arc de Triomphe winner TORQUATOR TASSO, as well as the Preis von Europa and Grosser Preis von Bayern. She won the Gr.1 Grand Prix de Saint-Cloud on her first start of the current season last month and has now won 9 races. Her trainer, Sir Mark Prescott was thrilled and said “She won't go for the Vermeille, I think she'll go straight to the Arc. She's just good enough to go close. You've got a chance, therefore you must go. She's a marvellous filly and she's improved all the time. Her great gift is that she's straightforward. She's not worrying, she's not boiling over, she's not off her grub, she's not lame. She's improved every race and I think her success is because she's straightforward, she goes on more or less any ground, you can hold her up and make the running. It's like people, if they're very straightforward it's amazing what you can do”.  ALPINISTA is a first foal for her Listed winning dam ALWIDA (by HERNAND) and her half-sister is now three-year-old filly ALPENBUME who remains unbeaten in two starts and is trained in France by Tim Donworth.  The second dam is the three-time Gr.1 winner ALBANOVA who is a full sister to dual Gr.1 Champion Stakes winner ALBORADA. 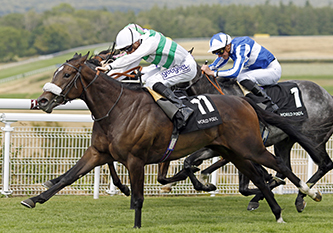 Three-year-old filly SANDRINE bred and owned by Lanwades won her second Group 2 of her career when winning the highly competitive Gr.2 Lennox Stakes at Glorious Goodwood.  SANDRINE raced keen early on and was always prominent and hit the front a furlong from home to gamely score by a neck.  SANDRINE has now run nine times and won the Gr.2 Duchess of Cambridge Stakes as well as the Gr.3 Albany Stakes as a two-year-old and was also third in the Gr.1 Cheveley Park Stakes.  She started her three-year-old campaign by finishing a credible fifth in the Gr.1 1,000 Guineas and was placed 3rd in the Gr.1 Falmouth Stakes before dropping back in trip to win the 7f Gr.2 Lennox Stakes.  A delighted Andrew Balding, who trains the filly, said after the race - “SANDRINE looked like she would win the Falmouth at one stage and probably just didn’t quite get home. We just felt that if she was effective at seven furlongs, she could be a filly for the Prix de la Foret, as she goes on any ground. We just wanted to try her round a right-handed bend before that and it’s worked out well. “I don’t know about the Breeders’ Cup. We’ll see what the owner wants to do, but the target looks to be the Foret, and she doesn’t have a penalty in the City of York Stakes, so that could be a steppingstone.”  SANDRINE is by Lanwades’ sire BOBBY’S KITTEN. 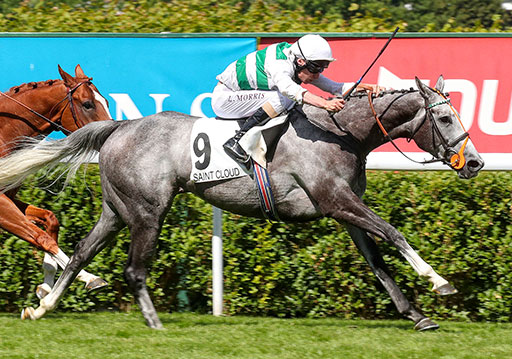 Lanwades-bred fourth generation homebred ALPINISTA won her fourth straight Group One when taking the competitive Gr.1 Grand Prix de Saint-Cloud at Saint-Cloud in impressive style. This was her seasonal debut after winning three Group ones in Germany in 2021 the last one on 7th November 2021 where she won the Gr.1 Grosser Preis von Bayern in Munich. Trained by Sir Mark Prescott and ridden by Luke Morris she stayed on really well to beat a high-class field of runners.

Her trainer was thrilled with her and in his post-race interview he said “It was a faultless performance. Her mother was better at five and even though this filly won three Gr.1s at four, you would hope she could improve a tiny bit more. We will discuss plans, but I would think one run before the Arc, probably, and conventionally you’d go for the Prix Vermeille – it’s the obvious choice.”

ALPINISTA is a first foal for her Listed winning dam ALWILDA (by HERNANDO) and her half-sister a now three-year-old ALPENBLUME who remains unbeaten in two starts and is trained in France by Tim Donworth. The second dam is the three-time Gr.1 winner ALBANOVA and is a full sister to dual Gr.1 Champion Stakes winner ALBORADA.

DEVILRY 2018 filly by SEA THE MOON ex DIABLERETTE - In Training
Own sister to PONDUS, a Stakes winner in Ireland and Gr.2 placed; Gr.3 placed in Australia

WAVE FAREWELL 2019 filly by BOBBY'S KITTEN ex WAVELET - Out of Training
Her triple winning da is a granddaughter of European Champion 3yo filly RAMRUMA. 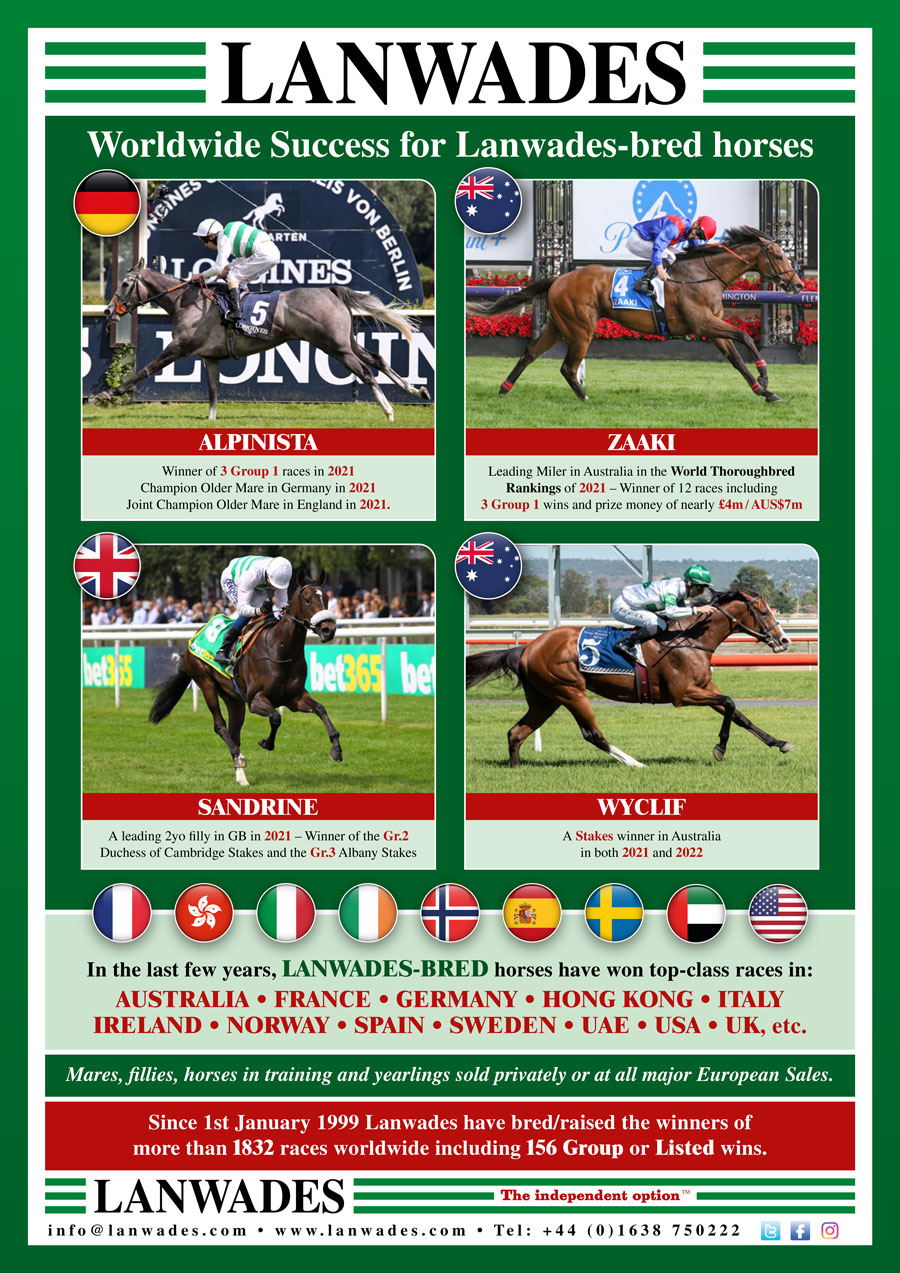 28th March 2022
BOBBY'S KITTEN sires 2 new 3yo winners
BOBBY'S KITTEN sired two new winners at the weekend.  First up was 3yo colt BOB'S YER UNCLE who won his maiden in Japan over 8.5 furlongs. He was purchased as a foal at the Tattersalls December Sales by Paca Paca Farm and runs in the colours of Godolphin.  Next up was GRAND LARGE 3yo son of BOBBY’S KITTEN who won  easily on debut at Toulouse over 8f. GRAND LARGE was smartly away and made all to win by 5 ½ lengths. He was purchased as a yearling at the Arqana Yearling Sale by his trainer Damien Watrigant when consigned by Haras de Bourgeauville.

22nd March 2022
SEA THE MOON'S son PRETTY TIGER wins a Group 3 at Saint-Cloud
PRETTY TIGER by SEA THE MOON won the first Group race of the 2022 European Flat season - the Gr.3 Prix Exbury at Saint-Cloud at the weekend.  PRETTY TIGER beat a classy field which included last season's dual Gr.1 winner SKALLETI.  This was PRETTY TIGER's sixth win of his career having already kicked off 2022 with a Listed win at Cagnes-Sur-Mer in February.  His biggest win to date came last season in the Gr.2 Prix Eugene Adam also at Saint-Cloud. He was bred by Chevotel de la Hauquerie and was bought by Oceanic Bloodstock for €105,000 at the Arqana August Yearling Sale and now runs in the colours of Bernard Giraudon.

28th February 2022
A special recognition award for Julian Lloyd at the ITBA National and Breeding Awards 2021
After three decades of service as Manager at Staffordtown Stud, Julian Lloyd was awarded the Special Recognition Award - congratulations!-  https://bit.ly/36Ms7il

14th February 2022
First Stakes winner of the year for SEA THE MOON
SEA THE MOON's now four-year-old son, PRETTY TIGER, started his 2022 campaign in great style when easily taking the Listed Grand Prix de la Riviera Cote d’Azurthe at Cagnes-Sur-Mer yesterday by two lengths.  Already a winner of the Gr.2 Prix Eugene Adam last July as well as the Listed Prix Francois both at Saint-Cloud, he had also been Group 2 placed at Deauville and Gr.3 placed at Longchamp last year.  PRETTY TIGER was bred by Chevotel de la Hauquerie and was sold for €105,000 at the Arqana August Yearling Sale. He has now won five races and prize money of over £240,000.

1st January 2022
Happy New Year
Wishing all our friends, colleagues and clients a very Happy, Healthy and Successful 2022 from us all at Lanwades.